(9) What do Spike's subscriptions and YASUDA's founding mind have in common? 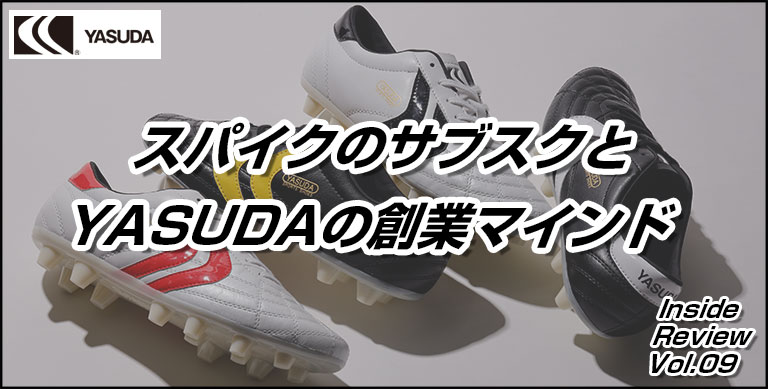 Hello everyone.
This is the 9th inside review.

No, I'm really sorry.
About half a year.

In 2020, there were various things around the world, so there was a time when I was worried whether I could keep my promise to "ship in mid-September", but things went smoothly. I am relieved.

It's very timely, but the other day all the shoes were in the warehouse.

We are currently making a final confirmation, but it seems that we will be able to ship sequentially from September 10, 2020 as scheduled. It was good.

It is the service in at the same time as shipping

This time I would like to talk a little about this service.

・ Why is it a soccer spike subscription?
・ Meaning that YASUDA subscribes

What is Spike's subscription reuse?

First of all, let's take a look at what kind of service this spike subscription "Excel Feed" is.

・ For 2,980 yen (excluding tax) per month
・ Provide new spikes from YASUDA once every three months (commutative)

It is a service that we will do.

Therefore, it is a service that is supposed to be used by a wide range of athletes, both students and professionals, who wear spikes frequently.

This kind of service with soccer spikes is the first in the world!

So, if there are used spikes that can still be used, they will be provided free of charge to emerging soccer countries overseas. This service is up to that point.

There are many countries in the world where the environment for playing soccer is not yet in place.
In some areas, I don't wear shoes in my daily life.

Making soccer spikes is never easy, so I hope many people will know the joy of wearing shoes and playing soccer.

・ It will also contribute to the world through soccer. 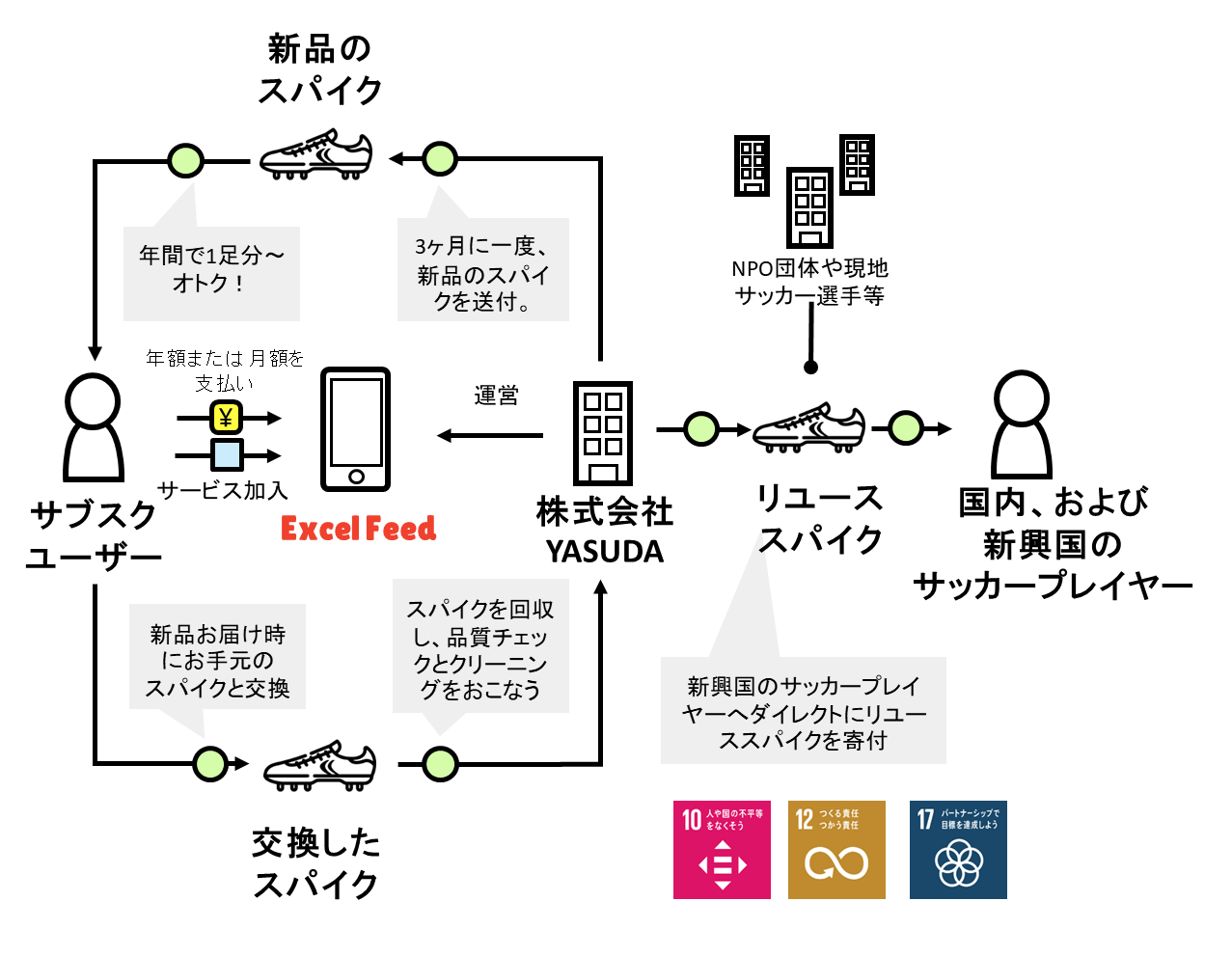 I would like to talk about why we decided to provide this service.
It's important, so please read it to the end.

What's beyond the YASUDA reprint?

To explain why we offer Spike's subscription and reuse services, we need to go back a bit.

YASUDA was born in 1932 as Japan's first soccer spike maker, but went bankrupt in 2002 just before the Japan-Korea World Cup was held.

After 16 years of sleep,

YASUDA is reprinted in 2018.
It was a reprint that was made possible with a lot of support through crowdfunding.

Well, I think that there are many people who know it because I have explained it in various places so far.

■ "Reproduction of YASUDA spikes" is the first goal

The purpose of the reproduction is exactly "reproduction of shoes".
It was to bring the shoes of the past back to this era.

It was made using and following the past, including the materials, manufacturing methods, and shoe types of the time. 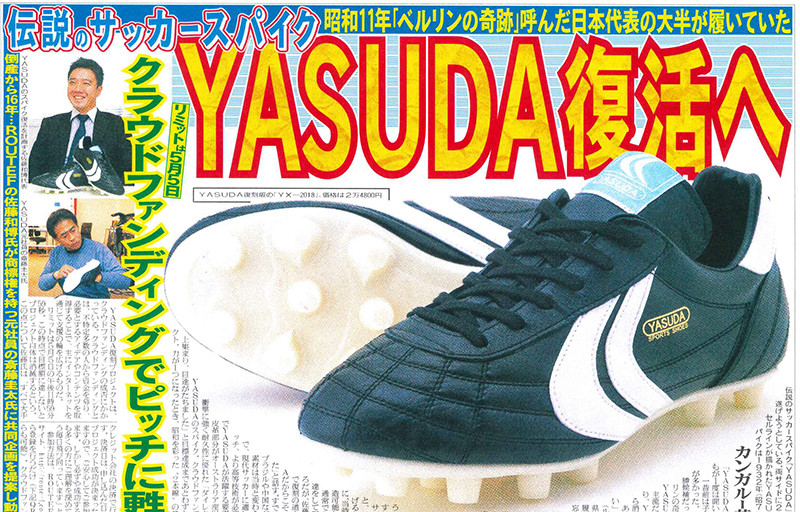 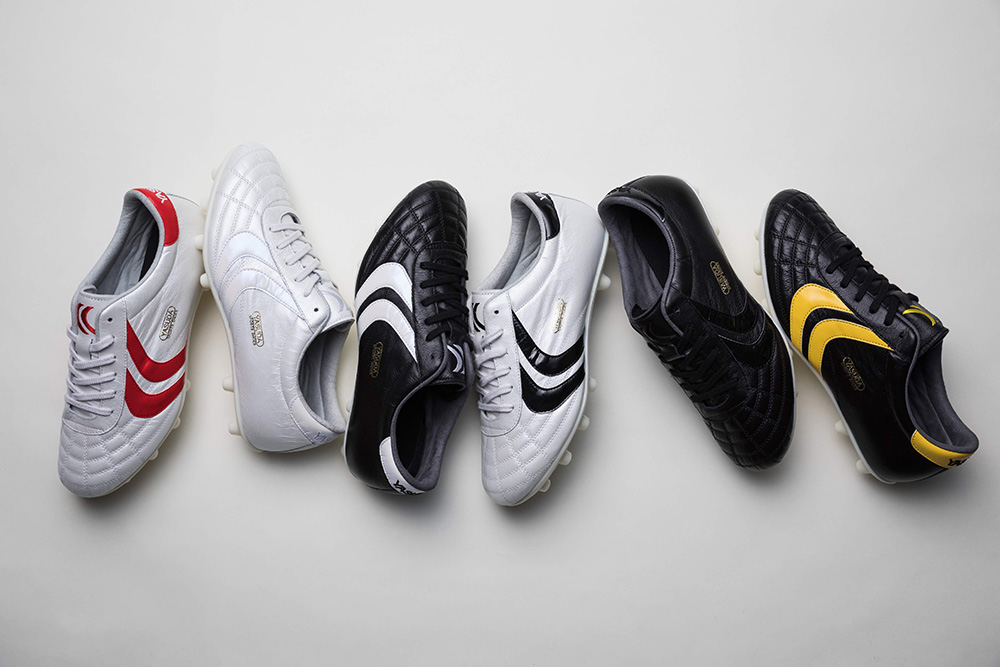 Making these was the first stage of the reprint.
I wrote it as smooth, but there were so many hurdles ...
With the cooperation of many people, it was a reprint that was somehow realized.

And YASUDA who made "reprint spike" was heading for the next goal.

■ Spikes that have evolved beyond reprints

Next, we will start development to make "spike that evolved reprint spike".
Just about a year ago, it was the summer of 2019. 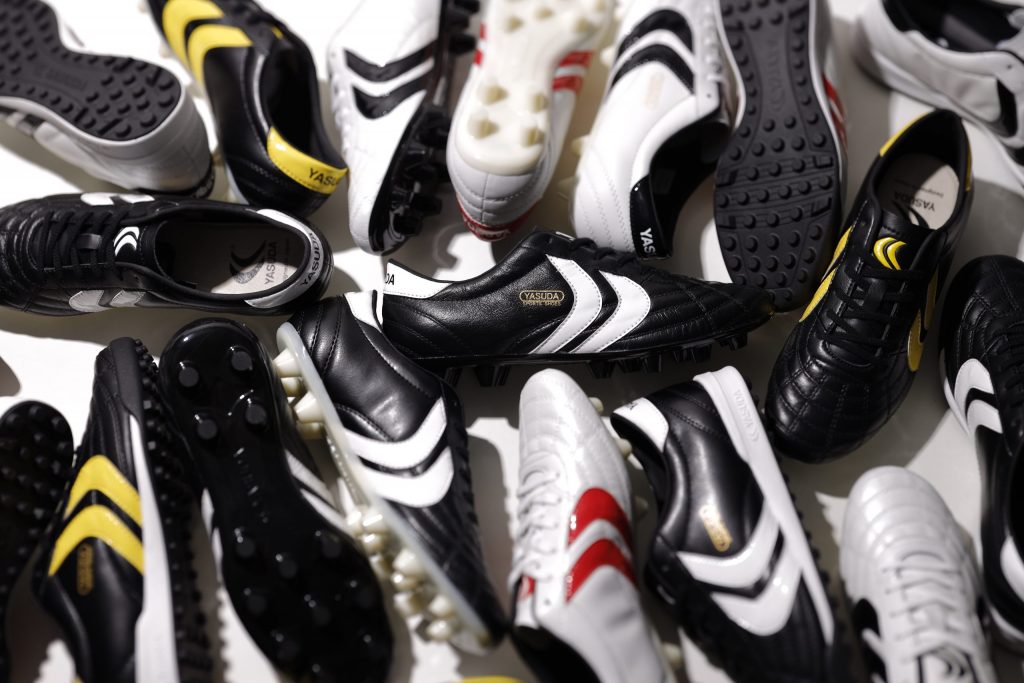 Introduced here.
* If you haven't read it, please do.

What we are trying to offer with the new shoes

That's what it means.

Since its founding in 1932, YASUDA has cherished the idea of "using good things for a long time."

Shigeharu Yasuda, the founder, was said to have traveled far by bicycle for repairs when called.
I think it wasn't easy to buy a new one, but it seems that the founder himself was doing that.

I wanted to take over such "YASUDA mindset from the time of establishment" and decided to provide a subscription reuse service.

Unlike in the past, it is unlikely that shoes will break frequently, so the mechanism is such that the spikes themselves play that role for a long time and can be used.

And it is a service that embodies the desire to realize something that is useful to people.

With us YASUDA who provide spikes,
Everyone who uses the service

The spikes help someone who loves football as well somewhere in the world.

"Use good things for a long time"

Spike's subscription is a service that inherits YASUDA's founding mindset.

Which is better, subscription or regular purchase

・ The evolution of spikes themselves is also YASUDA-like.
・ And the mindset of YASUDA in the form of providing it

I would like to continue to value "YASUDA's founding mindset" in this way.

It is different from "sticking to the past", and I would like to continue to provide the goodness of YASUDA to the world in each era.

If you don't wear spikes very often, I would like you to take good care of your pair, but it is a consumable item for athletes who use it frequently.

It may be good to leave the worn-out spikes as a memory, but if there is something that you can sympathize with this idea of "subscribing and reusing spikes", I would like you to use it and tell your acquaintances. I want you to raise it.

it's funny, is not it? Spike subscription. And reuse.

It seemed like an introduction to the service today, but I'm sorry.
Because I think it's a good initiative for us, so I wanted you to know.